I find it a little funny that these fluffy rolls filled with creamy brown sugar are simply called Spanish bread (also known as Senorita bread), despite being a Filipino creation. The Spanish occupation in the Philippines is a well-known fact. For starters, you can point out numerous borrowed Spanish words in Tagalog, the Filipino national language. But it's like a Filipino baker ran out of names for their recipes, and then pointed to the bread rolls declaring, "We'll just call that one Spanish bread!"

I'm sure there is much more to the story, and if you have something to share, please comment below! Regardless, Filipino Spanish bread is an underrated baked good recipe. It's rolled up like a thin cinnamon roll and filled with a milky, buttery stuffing. This roll makes a delicious snack or quick breakfast.

As a child growing up in the Philippines, I lost count of how many times I saw adults dunking a single Spanish bread roll into a piping hot mug of instant coffee. This morning routine has ingrained itself as one of my earliest childhood memories.

This is the first-ever post in a series of Filipino baked goods and pastries on my blog. I wanted to feature such recipes to show the diversity of Filipino food. The Philippines is an exotic place, but a lot of the cuisine, especially the bread and pastries, retain a profound European influence. This influence comes from Spain and, from what I've read, Portugal too.

Between rice and bread, we Filipinos prefer rice for our meals. But do not be mistaken, we love our leavened bread for those in-between merienda (snack) times. There are many panaderia (bakeries) in the Philippines, and bread is still a popular snack or even dessert, but never as a meal. That's why you will not see me preparing sandwiches for lunch. I grew up thinking of anything related to bread, such as sandwiches, as only a snack.

Bakeries in the Philippines

If you ever get a chance to visit the Philippines, make sure to visit a local bakery. Regional bakeries also have their own specialties of baked goods such as pandesal, ensaymada, and yema tarts. Los Banos, Laguna, the town where I was born, boasts a famous buko (young coconut) pie! Do not overlook baked goods in the Philippines.

What is Senorita Bread or Spanish Bread?

Just to be clear, Spanish bread isn't Spanish at all. It's a Filipino recipe made from combining local ingredients and techniques acquired during the Spanish colonization of the islands. This bread also goes by Senorita bread, but I have only ever known it as Spanish bread. I would like to know which regions in the Philippines call it Senorita instead of Spanish bread - let me know!

The bread is similar to another famous local bread roll called pandesal. But instead of a dinner roll shape, Spanish bread is flattened, then filled with a mixture of brown sugar, butter, condensed milk, flour, and breadcrumbs. Finally, it's rolled like an elongated cinnamon roll, and baked. The finishing touch is a dusting of breadcrumbs on top.

How to Make Filipino Spanish Bread

The required ingredients for this recipe are simple and easy to find. However, making Spanish bread takes a while because of the time spent rising the dough. There are two dough rising times, one after mixing the dry and wet ingredients and another rising before putting the rolls in the oven.

Set Up the Yeast

Add warmed milk, some sugar, and yeast to a bowl and let it sit for ten minutes. If you are using instant yeast, you can skip this step. Just add the dry and wet dough ingredients together, then mix until combined.

In another bowl, combine and mix flour, salt, and some sugar. After the yeast has activated, whisk in egg yolk and butter. Add the mixture to the bowl of dry ingredients. Mix with a spoon or spatula until you get a shaggy dough. Pour it out onto a surface and knead. Knead the dough for ten minutes consistently and then form a smooth ball. If you are using a dough hook, this step will probably take you half the time.

Put the dough in a bowl and let it rise for an hour or until it has doubled in size.

Add the flour, breadcrumbs, and condensed milk. You should end up with a thick paste.

Before assembling these Filipino Spanish bread rolls, I recommend setting up your workstation so that you can establish a flow in the recipe process. Clear some space on a countertop and create an area for your dough, breadcrumbs, and filling. Set up a lined baking sheet on the side, so you can quickly move the bread rolls to the oven after their second proof.

Split the risen dough into sixteen equal pieces. Shape the pieces into round buns so they are easier to flatten. Work with one dough ball at a time while keeping the other pieces covered to keep from drying out.

Flatten the dough with your palm, then roll it out to an elongated, triangular shape. Add the filling in the middle.

Tip One of the most common issues in baking Spanish bread rolls is that the filling leaks while baking. Make sure to leave about a half-inch to an inch space between the filling and outer edges. Doing this will help avoid a leak and keep all the creamy filling inside. You may want to also use less filling than I do. Experiment and see what works for you.

Roll it up to the third point, starting from an edge between two points. Close it by pinching the outer flap onto the dough. Roll it in the breadcrumbs. Using your palm, roll out the dough even further to your desired length. Then place the roll seam side down onto the baking sheet. This step will help keep your bread from unraveling during baking.

Cover the unbaked Spanish bread and let it rise for a second time for thirty minutes. Once they are puffy, you can bake them uncovered in the oven.

How to Bake Spanish Bread

This is one of those times where I highly recommend you closely watch the bread cook in the oven. It can quickly burn, and you will end up with hard bread! Bake in the oven at 150°C (300°F) for fifteen to eighteen minutes. It only took my oven fifteen minutes to fully bake them.

I made Filipino Spanish bread per the recipe and then put some in the freezer before the second rise. When I was ready to bake more, I took the rolls out to let them thaw. Once they thawed, I did the second proofing before baking. They are as fresh as if they were made the same day! I suggest making some coffee when you eat these. They make a quick and sweet breakfast to help start your day! 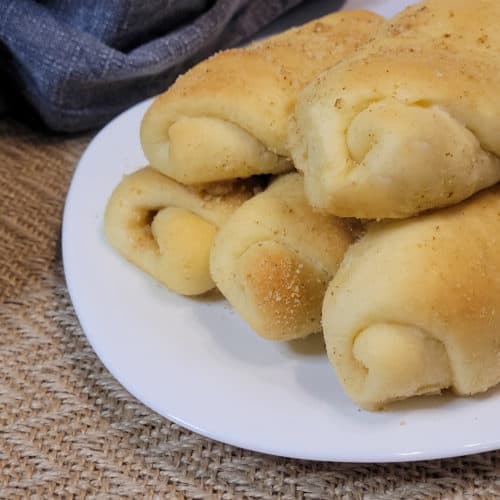 Borrowed from European baking techniques, this recipe is a Filipino invention in its own right. Enjoy it with a hot mug of coffee or as a simple snack by itself!
Print Recipe Pin Recipe
Prep Time 1 hr 30 mins
Cook Time 20 mins
Course Snack
Cuisine Filipino
Servings 16 bread rolls

More recipes you may enjoy 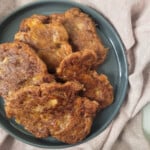 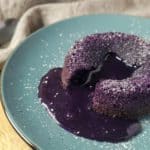